A naive assumption of the vegan diet is that it saves the world from animal cruelty.

This is wrong and only makes things worse. It turns out that a plant from a grocery store is less vegan than a local grass fed cow.

This is an inconvenient truth for vegans…but it’s time to wake up.

If you want to reduce animal cruelty in the world, the best thing you can do is become a carnivore. 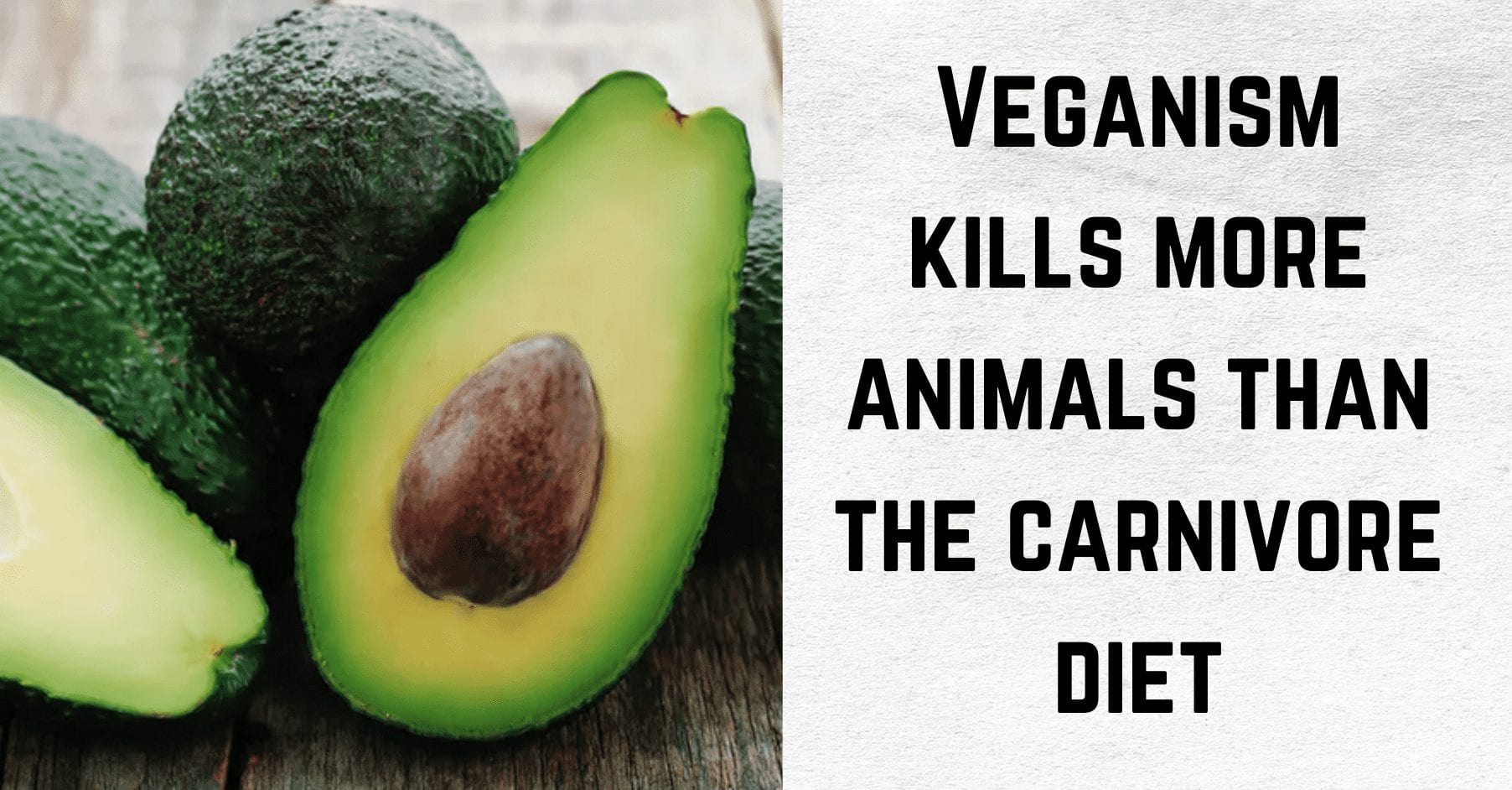 The second order consequences of the vegan diet are hard for most people to grasp. Because an animal with big, cute eyes isn’t killed, many assume that it’s more ethical.

However, the titanic sum of animals killed to preserve a nutrient deficient, vegan lifestyle is gruesome.

First, the soil tilling process is like a tsunami, destroying all life in its path. To clear the soil to plant crops, farmers must till the soil. This kills any animals residing there.

Next, how do you think farmers defend crops for the green smoothies, salad and avocado toast?

Farmers spray fields with pesticides to kill off even more insects. Not only do these pesticides decimate insect life, they’re also very damaging to human health.

According to Mike Archer, a Professor at the University of NSW, 25 times more animals die to produce an equal weight of wheat protein and beef protein. It’s horrible from an environmental, health and moral perspective.

All in all, billions of animals die for the vegan lifestyle. Whereas carnivores can live off of 1-2 cows a year. And those cows are curing their chronic disease.

Another horrific example of the unintended consequences of the vegan diet is the destruction of bees.

To spare a cow from giving it’s nutritious milk for human consumption, many vegans have instead opted for alternatives like almond milk. This has helped to spur a $6bn almond industry in California.

The only way to support such an artificially high consumption load is to send bees to pollinate the almond flowers. It’s almost like sending bees off to war.

One of the most lucrative sources of beekeeper revenue is now “renting out” farms to almond producers.

And similar to war, this process is decimating the bee population. Intended. Unintended. It doesn’t matter. The consequences are still the same. The vegan diet is gruesome and destructive to animal life.

Other Animals Used in Plant Production

To underscore my point: you cannot produce the requisite amount of plants without killing or enslaving animals in the production process.

Almonds aren’t the only culprit.

“forcing bees to gather pollen and nectar from vast swaths of a single crop deprives them of the far more diverse and nourishing diet provided by wild habitats. The migration also continually boomerangs honeybees between times of plenty and borderline starvation. The sugar syrup and pollen patties beekeepers offer as compensation are not nearly as nutritious as pollen and nectar from wild plants.” [*]

“At least 100 mice are killed per hectare per year (500/4 × 0.8) to grow grain. Average yields are about 1.4 tonnes of wheat/hectare; 13% of the wheat is useable protein. Therefore, at least 55 sentient animals die to produce 100kg of useable plant protein: 25 times more than for the same amount of rangelands beef.”

And these deaths are brutal. Mice are often poisoned by pesticides and are effectively tortured to death.

You can try to dismiss these as lesser creatures than cows. But what about all the spiders, snakes, lizards and insects?

The list goes on and on. Wineries use sheep to remove weeds. Tinned companies are often picked by slave and child labour. Ducks are used in rice fields to control weeds and pests.

The truth is disturbing and far too unethical to ignore at this point. The naive notion that the vegan diet saves animals is faker than beyond meat.

But But….Cows Are Animals Too

What about the horrific images of cows in feedlots? I agree. I despise cramped feedlots and in no way is that what I advocate for.

However on the other hadn, grass fed, pasture raised cows is the most sustainable form of agriculture. Not only does it provide the most nutritious food in the world, it is how cows were meant to live.

In fact, in many ways it’s better than cows would live on their own in the wild.

The best part: just 1 cow will yield ~430 lbs of retail cuts of beef. That’s enough to feed 1 carnivore for an entire year.

Given there are more than 1.5 billion cows on the planet, that’s a lot of meat to go around to support the most nutritious diet in the world. Even with inefficient livestock production, 5X as many bees die pollinating crops as do livestock annually. We can’t forget that humans are animals too. The most important animals in the world.

What about the billions of suffering humans around the world? How much do vegans actually care about them?

At this rate, all we’re doing is saving a planet for humans withering away with chronic disease.

If you care about animal cruelty and animal health, the best diet is the carnivore diet.

If you’re interested in a more comprehensive guide, sign up for my weekly newsletter for FREE access to the 30 Day Guide to Mastering the Carnivore Diet below.