The Crisis of Masculinity: How Modernity Has Destroyed Men

There’s a crisis of masculinity. Men are:

But even more importantly, men are existentially deprived.

Yet the mainstream continues to deride men.

The modern world has robbed men of all of their meaning in life. And this trend is not slowing down.

It’s tragic to think that the most heroic men today are those that sign economic stimulus plans. Men that move around numbers in a database.

Is it really man’s destiny to be reduced to such cowardly, pacified creatures, competing to swindle each-other out of money? 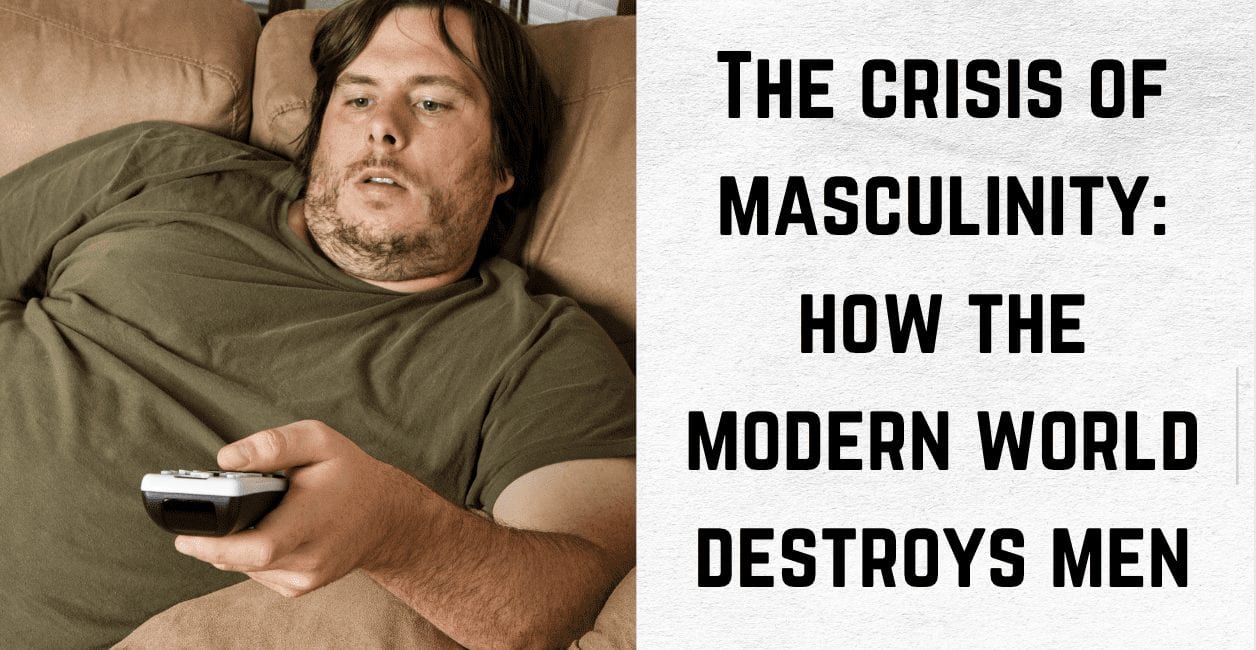 Human evolution transpired over millions of years. But we were thrust into the modern world in <100 years with technology.

Humans have been teleported to a completely foreign environment. And like a Lion that is dropped in the ocean, we don’t know how to swim.

For millions of years, men were required to hunt, gather and protect the tribe. Men gathered together in gangs, took responsibility and fought for the tribe’s life.

Humans have always been a patriarchal gang species that regularly experienced violence. Attacking the “patriarchal” construct is almost equivalent to tackle our need for h20, o2 and red meat…

The Modern World and Men

But the modern world has obviated this need and blanketed us in comfort.

The automatic conveyor belt has abolished the need for strong men. A life of safety from the comfort of the couch has replaced a life of primal warfare.

The modern world offers nothing for true men.

Just ways to titillate yourselves to death and distract you from the harsh reality that you have no purpose.

You’ve been born into a world of pleasure and told to sit down and shut up because all that matters is your next paycheck.

You sit on your ass all day at a risk-less, boring job and pretend that you care nothing more than formatting a powerpoint presentation to perfection. Is This Men’s Destiny?

Men have become slaves to bureaucrats. Clocking in. Tuning out. Senses dulled. Sitting in their doritos filled pod.

Every single need satisfied at the click of a button.

Poor? The govt gives you money.

Their bellies are full. But their minds are dulled and craving for more.

Anything that can offer you a dash of purpose is stamped out.

Instead they’re told they’re offending others and need to apologize for who they are.

There’s a hole inside of men. And they cover it up with simulations of what it’s like to be a real man. Sports. Fantasy teams. Video games. Movies of heroes.

But how long until they decide to forgo the simulation for the real thing?

Men Are Secure, But They are Sad & Depressed

Men are sad and depressed.

The foods that men need to survive are extirpated from society. They’re told to eat soy and sawdust instead.

And this trend is not slowing down.

Men were not destined for this life of wageslavery.

Men’s genes didn’t evolve over millions of years to sit on their ass all day and eat Lays.

But now most men are completely replaceable automatons.

They have no purpose. Nobody that even relies on them.

They think they have “passion”. But it’s just for the latest micro brew and sports team.

But nobody lived a fulfilling life because their favorite team won games. It’s an absolute joke how much fulfillment and purpose men get from sports.

This Trend is Not Slowing Down

So what do we propose? Give them money! Universal basic income will solve everything!

The future is going to be full of more bureaucracy, apologizing, identity politics and cancelling.

If the world continues to treat men this way, it will be disastrous. It is in everybody’s best interest to support men.

How to Break Free

Civilization has eliminated risk. But our bodies crave it. The first step of breaking free from the smothering tentacles of modernity is to break your addiction to comfort.

There are countless stories of men escaping the oppressive comforts of civilization to free their mind.

The Epic of Gilgamesh tells of a brotherhood, oppressed by idleness who escaped from the comforts of civilization.

To fulfill his destiny, he knew he had to leave civilization and answer his call to fight evil.

Siddhartha Gautama was born as a wealthy prince. But was depressed and dissatisfied. He abandoned his life of comfort for an ascetic homeless lifestyle. And he later found enlightenment. Siddhartha Gautama is also known as the Buddha.

Men need a real purpose beyond pandering to their shitty beauracratic boss. Something beyond cheering for their team every Sunday.

But before men can find their purpose they need to remove the things that sabotage their masculinity.

Anything that lowers your testosterone will reduce your masculinity. It’s no coincidence that testosterone levels are down and that all the diets the mainstream promotes reduce testosterone. Mark my words. When your physical health improves, doors will open for you that you never knew existed.

When you live on a higher plane of consciousness, it’s almost impossible to care about the same bullshit you used to.

These habits are hard to start, but  impossible to quit.

Then and only then can you work on “finding your purpose.”

However, it’s not a formula. There’s no pill for purpose. You need to trust the process.

Find things that interest you other than fantasy sports. Read books. Build a tribe. Follow a mentor.

Be a fucking man.

The first step: fix your diet. If you don’t know where to start, sign up for my guide to mastering the carnivore diet below. What are you waiting for?